The words “hip hop” can mean lots of different things to lots of different people. If you started asking around, some of the answers you might hear would include a type of music, a type of dance, a cultural movement, and a way of life. And in truth, all of them would be 100% correct. But no matter what “hip hop” means to you, it is undeniably a powerful and significant aspect of American popular culture and has been since the early 1970s.

In today’s blog from Mercury Academy of Dance in Centennial, we’ll take a look at the aspect of hip hop that we know best — hip hop dance. However, we’re not just going to focus on the style. We will also take a look at the social movement and history of where this incredible and intoxicating variety of dance styles blossomed.

If you’re interested in starting to learn hip hop dance, visit our dance class registration page online and find the class that’s right for you.

The Social Scene That Gave Birth To A Movement

Hip hop was born in the 1970s in the black urban communities of Harlem, Queens, Baltimore, and Chicago. Although a distinct culture movement was also emerging on the West Coast in cities like Los Angeles and Oakland, most people agree that the primary influences of hip hop culture seeded on the East Coast first.

Hip hop culture centered on a few different aspects of importance in the black communities of these major cities, including dance, music, community gatherings, sports, and political protest. Each of these was represented in the movement through break dancing, early hip hop music and the “boom box,” MCing and DJing events, basketball, and the rise of graffiti as a politically charged art form, respectively.

By and large, the hip hop movement was a black movement created to empower, define, and project black-American culture within a larger social context where the black community was largely disenfranchised, marginalized, and economically disadvantaged.

Different styles of dance that would eventually meld together and become known under the broader term of hip hop dance developed distinctly in different pockets around the United States, but just like hip hop music, were primarily distinguished between the East and West Coast movements.

The style of dance that is known as “B-Boying,” or more commonly as break dancing, was born in cities like New York and Chicago. It involved powerful, aggressive movements, jumps, and ground-based acrobatic and balancing stunts, and was often performed on top of a piece of cardboard laid on the sidewalk or blacktop.

Pioneers like Tommy the Clown and Don Campbell helped new styles evolve and planted the seed for a growing West Coast dance movement that today is often referred to as “popping” and “locking.” 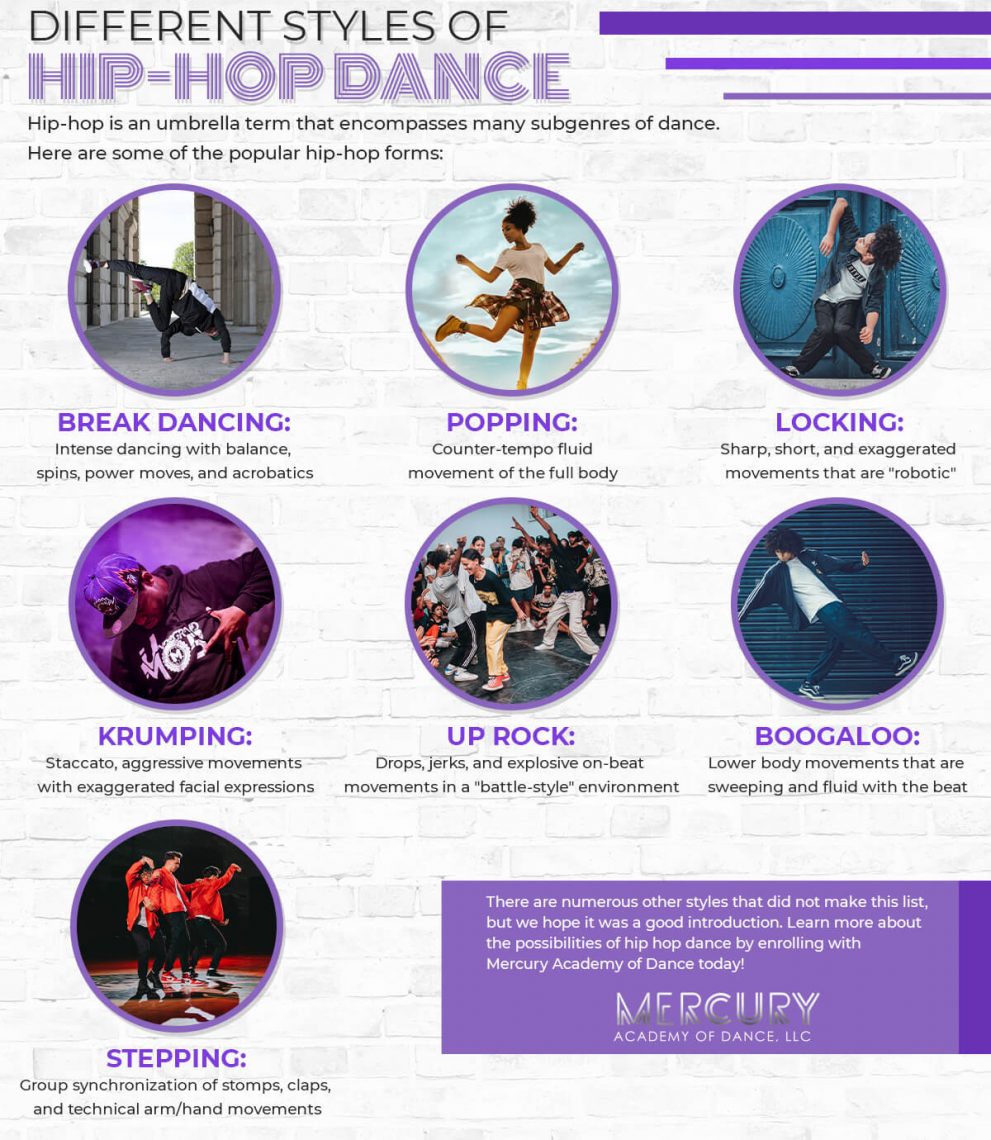 There many different subgenres of hip hop dance — far too many to cover in an article like this, as a matter of fact. But below, we will cover the primary influencers, long-standing styles, and emerging forms in a little detail. These are styles of hip hop dance that will be taught and referred to in almost any hip hop dance class setting, given enough time.

If you want to learn hip hop dance, join one of the many hip hop dance classes offered at Mercury Academy of Dance in Centennial today.